How to prevent costly lack of communication mistakes 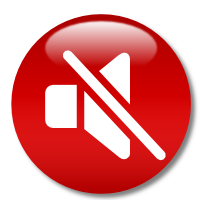 Does it ever frustrate you that your team seems incapable of communicating important information? That one person knows something and assumes another knows when they don't? Has this cost you time, money or embarrasment?

Fortunately there is a better way. By implementing strong and efficient procedures you can prevent important information being lost in communication. TaskTrakz can help you quickly and easily implement these procedures.

George, a software engineer, implements a new feature in the product. This feature is focused on fixing the back end of the product, but requires some small user interface changes. George completes the feature and submits it for testing.

The feature is tested using a standard automated test suite and integrated into the product. Two weeks later a new version of the product is shipped to the customers including the new feature.

Five minutes after installing the product the customer is on the phone yelling at the project manager. The new feature broke the user interface. A day of scrambling to get the customers systems rolled back to the previous version, 3 days of hunting down the bug in all of the code for the previous release, and a contract penalty ensue.

In the root cause analysis meeting held the next week, the problem code is pinpointed. The problem should have been caught by the manual user interface testing procedures, but they had not been run on this version. Because the manual testing procedures are time consuming and expensive they are only executed when needed. George had assumed that the test engineers knew that the test suite had to be re-run because the user interface had been changed, the test engineers had not been aware it had changed. A small detail that could have been fixed with a few words cost a week of delays and caused a contract penalty, affecting the profitability of the project.

The custom software development workflow of the company consists of four states. A task moves from not started, to implementation, to testing, to completion. If testing fails it may move back to implementation to fix problems before being resubmitted for testing.

The software development workflow of the company.

To prevent this problem in TaskTrakz, two simple customizations could be made.

First create a custom Yes/No field to track whether the user interface has been changed, and therefore the manual test suite needs to be run for this feature. 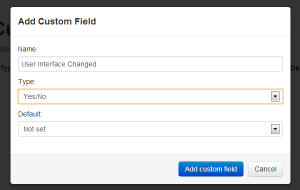 Step 1. Add a custom field to track whether the user interface has been changed directly on the task.

Secondly make this field a required field for the transition between implementation and testing. This means that any time a developer submits a task for testing, they will be asked to complete this field, and specify whether the user interface has changed. 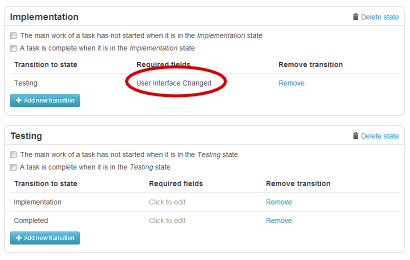 Step 2. Add the custom field as a required field on the transition between Implementation and Testing. 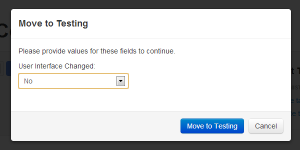 The result: developers will be asked whether the user interface changed when they submit a task for testing for the first time.

This small but crucial piece of information is tracked and associated directly with the task. The information can be easily reviewed, and the test team will always know when the manual test suite needs to be executed. A week of time is saved, no contract penalty is received and the customer is happy and perceives the quality of the software to be higher.

Keep your team working together and on the same page with TaskTrakz. Get your free 14 day trial here.